Yukon’s Own: Our Most Prolific Journalist-Author Ever 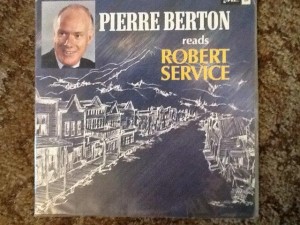 (Berton did a lot of media work; doing an LP for Arc was a natural since he grew up in Dawson and was well-aware of Service, later doing an interview with the author in France for CBC TV; cover by Windsor Art Studios) 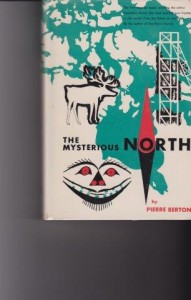 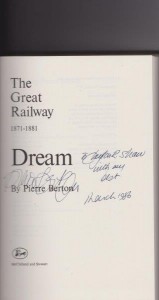 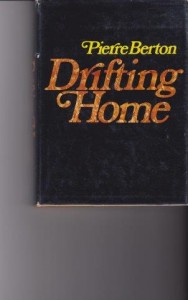 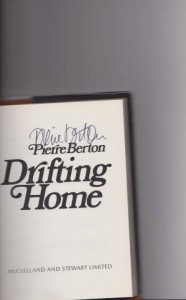 (he took his family back to Dawson via boat; dj–signed, McClelland & Stewart, 1973) 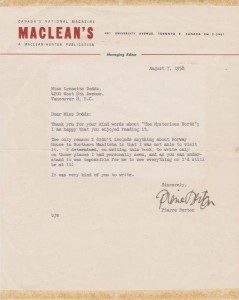 (rare 1958 signed letter from his days at Maclean’s magazine)

Whitehorse, YK-born Pierre (Francis de Marigny) Berton (1920-2004) was a popular best-selling journalist, historian, and media personality. Along with Farley Mowat, he was quite likely our country’s most popular and best-known writer in the ’50s through to the ’90s and a prolific non-fiction writer. In all, he wrote 50 books and was a great popularizer of Canadian history with tales of Arctic exploration, the building of the CPR, the Dionne quintuplets sensation, and the Gold Rush.

Always ambitious, Berton started his career in Vancouver as the youngest editor of any Canadian newspaper, edited MacLean’s  (from 1952- 1959), was a dogged panelist on CBC’s Front Page Challenge, and hosted the Pierre Berton Show from 1961-1973. He won the Governor General Award three times for The Mysterious North (1956), Klondike (1958), and The Last Spike (1972). Berton had a passion for quirky anecdotes and stories which were often featured in his work.