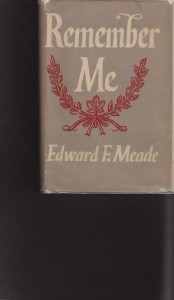 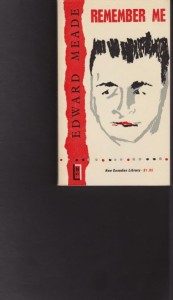 (as interesting was this McClelland & Stewart 1965 pb ed.; cover: Jane Brook & John Zehethofer; N.B. the original ed. was trimmed about 1/3 by the author; this ed. restored the 1/3 originally taken out and is the author’s preferred ed.)

Edward F. Meade (1912-2005) was born in Winnipeg in 1912. During WWII, he served as a platoon commander in a tank transporter outfit . It was then that he wrote Canada’s Great WWII Novel Remember Me in France, sending the manuscript home to his wife in installments (two installments got lost in war action). He finished writing the book in 1945; a condensed version appeared in the Montreal Standard, and a fuller version was published in 1946.

However, it wasn’t until the 1965 McClelland & Stewart printing that the author’s complete and final version was finally realized and published. Meade settled in Campbell River, BC and became an amateur archeologist, interested in the culture of Northwest Coast First Nations Peoples.