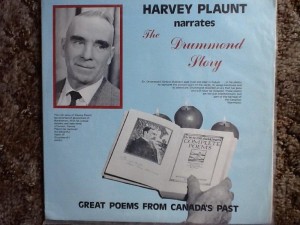 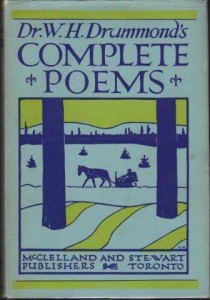 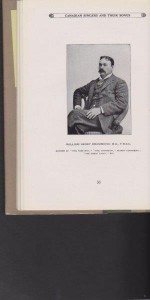 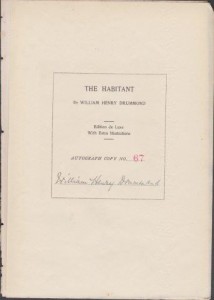 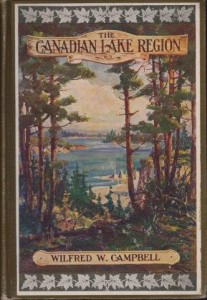 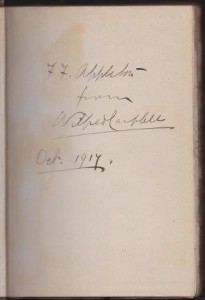 (left to right/top to bottom:  The Drummond Story–rare LP; Dr. W.H. Drummond’s Complete Poems; McClelland & Stewart, 1926, dust jacket by Thoreau MacDonald; photo of author from Canadian Singers and Their Songs, McClelland & Stewart, 1919; ltd. ed. page of The Habitant and Other Poems signed by Drummond, 1897; color paste-on cover for The Canadian Lake Region: Musson, 1910; photo of Campbell from Canadian Singers and Their Songs ; 1919, rare inscription by author in Canadian Lake Region)

William Henry Drummond (1854-1907) was Irish-born, but settled in Montreal as a physician-writer. He is remembered for his French-Canadian-accented Habitant poems written in English, which today would likely be considered politically incorrect by some Quebecers. Popular poems of his time included “Little Bateese” and “The Wreck of the ‘Julie Plante'”. An interesting, rare LP of olde is Harvey Plaunt Narrates the Drummond Story.

Wilfred W. Campbell (1858-1918) was an Ontario minister-nature poet of the Upper Lake region. His best known poem is “How One Winter Came in the Lake Region”.